“Criminalization of LGBTIphobia in Brazil is our Stonewall’s gift” 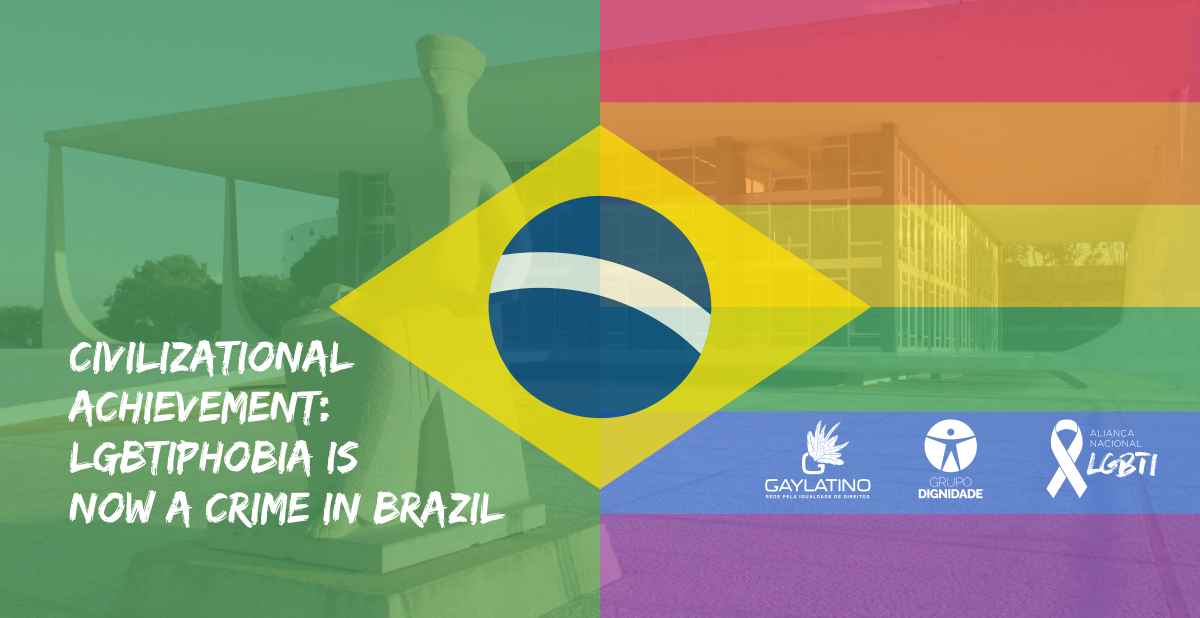 OFFICIAL STATEMENT
BRAZIL’s NATIONAL LGBTI+ ALLIANCE COMMEMORATES CIVILIZING VICTORY IN THE SUPREME COURT: A PRESENT ON THE 50th ANNIVERSARY OF THE STONEWALL REBELLION

LGBTIPHOBIA IS NOW A CRIME IN BRAZIL

Omission by the Law does not mean inexistence of rights

By 10 votes to 1, the Brazilian Supreme Court has ruled in favour of LGBTIphobia being made legally equivalent to the crime of racism. This ruling will remain in force in the Judiciary Branch until the National Congress approves a law criminalizing LGBTIphobia

Curitiba-PR, Brazil, June 13th 2019 – Today the Brazilian Supreme Court finished its judgement of Direct Unconstitutionality (Omission) Action (ADO) No. 26 (filed by ABGLT) and Injunction Order (MI) No. 4733 (filed by the Cidadania (former PPS) political party). Both lawsuits relate to the criminalization of LGBTIphobia and asked for a deadline to be established for the National Congress to approve legislation on this issue in view of its failure to do so thus far, and/or asking for LGBTIphobia to be made legally equivalent to the crime of racism.

It took six Supreme Court sessions before the ruling was reached. Court ministers (judges) Celso de Mello (rapporteur of ADO 26), Edson Fachin (rapporteur of MI 4733), Alexandre de Moraes, Luís Roberto Barroso, Rosa Weber, Luiz Fux, Cármen Lúcia and Gilmar Mendes voted in favour of LGBTIphobia being legally equivalent to the crime of racism and also agreed that the National Congress had been omissive in not legislating on the criminalization of LGBTIphobia thus far. Minister Ricardo Lewandowski and Supreme Court President Dias Toffoli recognized that there had been omission but voted against equivalence to racism. Minister Marco Aurélio voted against both items, based on his understanding that harmony between the three branches of government (Judiciary, Legislative and Executive) needed to be preserved. However, at the summing up of the Ministers’ votes the final ruling was ten in favour of both counts and one against. Check out the Court Ruling below. Despite voting to the contrary, the vote given by Minister Marco Aurélio showed sensitivity with regard to the need to address LGBTIphobia, and it was recalled that the Minister had written an article published in a leading Brazilian newspaper to this effect as long ago as 2007 https://www1.folha.uol.com.br/fsp/opiniao/fz1908200709.htm

“These ten votes will be the guiding star for us to achieve our long dreamed of full citizenship. The Supreme Court ruling is a present given to us on the 50th anniversary of the Stonewall Rebellion [1]”, states Toni Reis, president of Aliança Nacional LGBTI+, who was present at all the Court sessions that analyzed the issue of criminalizing LGBTIfobia. “Now we are faced with the challenge of dialoguing in order to build a bill of law in the National Congress in keeping with the Supreme Court ruling regarding LGBTIphobia being legally equivalent to the crime of racism, and that once parliament has approved the law it will be sanctioned by the President of the Republic”, Reis added.

During her vote today, Minister Carmem Lúcia said “All discrimination is a form of suffering, but I have learned that some kinds of prejudice cause more suffering because some people are castigated in their own homes, just for trying to be who they are”.

Minister Gilmar Mendes stated: “The data put forward during this case demonstrate the extreme vulnerability to which LGBT groups are exposed in Brazil. The information shows the reiterated status of minorities exposed to acts of hatred without the State providing an effective response”.

At the end of today’s Court session, Minister and rapporteur Celso de Mello read the final ruling and stressed that that it does not restrict religious freedom, whatever the religious denomination may be, as long as such manifestations do not characterize hate speech, meaning manifestations that incite discrimination, hostility or violence against people because of their sexual orientation or gender identity, thus corroborating the view of the Brazilian LGBTI+ movement throughout its 41 years of existence.

Aliança Nacional LGBTI+ congratulates ABGLT (Associação Brasileira de Gays, Lésbicas, Bissexuais, Travestis, Transexuais e Intersexos) and the Cidadania (former PPS) political party, for having filed the lawsuits, and all the amici curiae for the briefs they submitted to the Court and which contributed to today’s ruling. We also thank the Federal Public Prosecutor’s Office and the support we have received to be able to contribute with briefs and to accompany these and other cases of interest to the LGBTI+ community under analysis at the Supreme Court. We also thank all the people and organizations who have contributed in order for us to reach this decisive moment. We extend our special thanks to Fundo Brasil de Direitos Humanos, the National AIDS Programme, the Joint United Nations Programme on HIV/AIDS, the Organization of Ibero-American States, the Brazilian Law Society, the Brazilian Family Law Institute, the Mixed Parliamentary Front for Respect for LGBTI+ Citizenship, Grupo Dignidade and Red Gaylatino, among others.

Thank you Supreme Court! This is the third major landmark towards the realization of the guarantee of equal rights and human dignity of the LGBTI+ community in Brazil. On 2011 the Supreme Court ruled unanimously for the recognition of equal marriage rights for same sex couples (including adoption in 2015). In 2018, the Court recognized trans people’s right to gender identity without the need for medical reports or surgery. The Supreme Court has pushed forward the history of civilization. Long live rationality and the process of civilization!

1. Until a law is passed by the National Congress intended to implement the provisions for criminalization set down in the Federal Constitution, article 5, items XLI and XLII, real or presumed homophobic and transphobic conduct involving hateful aversion to a person’s sexual orientation or gender identity, since it is paramount to expressions of racism, whereby racism is to be understood in its social dimension, because of identical reasons and by being typical of that crime, shall be subject to the primary precepts defined by Law No. 7716, dated 08/01/1989 and , in the event of murder, shall also constitute a circumstance that qualifies it as such, owing to its foul motive (Penal Code, article 121, paragraph 2, item I, “in fine”);

2. Penal repression of homotransphobic practices neither extends to nor restricts or limits religious freedom, whatever the religious denominations in question, and their followers and ministers (clergy, pastors, rabbis, mullahs or Islamic clergy and leaders or celebrants of Afro-Brazilian religions, inter alia) have the guaranteed right to preach and publicize, freely, by word, image or any other means, their beliefs and to externalize their convictions according to what is contained in their holy books and codes, as well as the right to teach according to their doctrinal and /or theological inclination, whereby they may seek and convert proselytes and hold church services and respective liturgies, regardless of whether the place where they do so individually or collectively is public or private, as long as such manifestations do not characterize hate speech, meaning manifestations that incite discrimination, hostility or violence against people because of their sexual orientation or gender identity;

3. The concept of racism, understood in its social dimension, extends beyond strictly biological or phenotypical aspects because, as a manifestation of power, it results from an historical and cultural construct driven by the purpose of justifying inequality and intended to achieve ideological control, political domination, social subjugation and denial of the otherness, dignity and humanity of those who, because they are members of a vulnerable group (LGBTI+) and because they do not belong to the estates of the realm that hold a position of hegemony in a given social structure, are considered strange and different, banished to the condition of people on the fringe of the legal system, exposed, as a consequence of hateful inferiorization and perverse stigmatization, to an unjust and harmful situation of exclusion from the mainstream system of legal protection.

[1] Fifty years ago, on June 28th 1969, at the Stonewall Bar, in New York, a crowd rebelled against policemen trying to arrest homosexuals. For three days and three nights LGBTI+ people and their allies resisted the police siege and this date became known as the Stonewall Rebellion. A year later, the first Gay Pride march was held, in memory of what happened and to highlight the fight against discrimination and in favour of respect and equal rights. The modern movement for the rights of LGBTI+ people was born. As such, every year worldwide June 28th is celebrated as LGBTI+ Pride Day.

###
About the Brazilian National LGBTI+ Alliance – The National LGBTI+ Alliance is a non-profit civil society organization with branches in all 27 Brazilian Federative Units and in more than 130 Brazilian municipalities. It works to promote and defend the human rights and citizenship of the Brazilian LGBTI+ community through partnerships with individuals and legal entities. It is cross-party and currently has over 700 individual members, approximately 50% of whom are members of political parties, providing representation of 30 of the 35 political parties currently in existence in Brazil. Further information at: www.aliancalgbti.org.br